LVetevendosje will lead Negotiations with Serbia

The opposition bloc and the Vetevendosje Movement are expected to announce today their co-governing agreement before the start of the constitutive session of the Assembly. Leaders of the Democratic League... 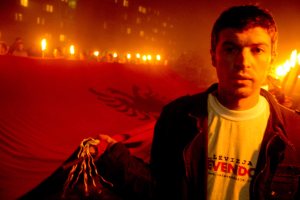 A former ‘Vetevendosje Movement’ activist holds an Albanian National Flag during a protest performance against Pristina-Belgrade negotiations in 2007. The movement which violated its principles turned into a political party and served as a crime laundry for numerous members of PDK ruling party of Kosovo, including its secret service members who are alleged for heavy crime commitment during and after the war in Kosovo. (THE Frontliner Photo/Vedat Xhymshiti)

The opposition bloc and the Vetevendosje Movement are expected to announce today their co-governing agreement before the start of the constitutive session of the Assembly. Leaders of the Democratic League of Kosovo (LDK), the Alliance for the Future of Kosovo (AAK), the Initiative for Kosovo (NISMA) and the Vetevendosje Movement met on Wednesday evening and sources from the meeting told Koha that an agreement had been reached. “Only a few details are left and Vetevendosje will look into them.

Tomorrow morning at 8:30-9:00, the leaders will have another meeting and they will give a joint press conference or issue a communiqué before the constitutive session of the Assembly,” the source said.

Vetevendosje MP Glauk Konjufca could not confirm the agreement on Wednesday but said he hopes it will be signed on Thursday. “In the last 24 hours, our positions have moved even closer and now we see greater readiness by the LDK, AAK and NISMA to remove differences with the Vetevendosje Movement,” Konjufca said.

KTV reported on Wednesday evening that political talks with Belgrade will be led by Ramush Haradinaj as Prime Minister, and technical talks by the Principal Deputy Prime Minister who will be from the Vetevendosje Movement. “Coalition parties will establish a joint coordinating group for talks with Serbia,” a source told KTV.